Her Lovely Heart: Creativity Is Intelligence Having Fun 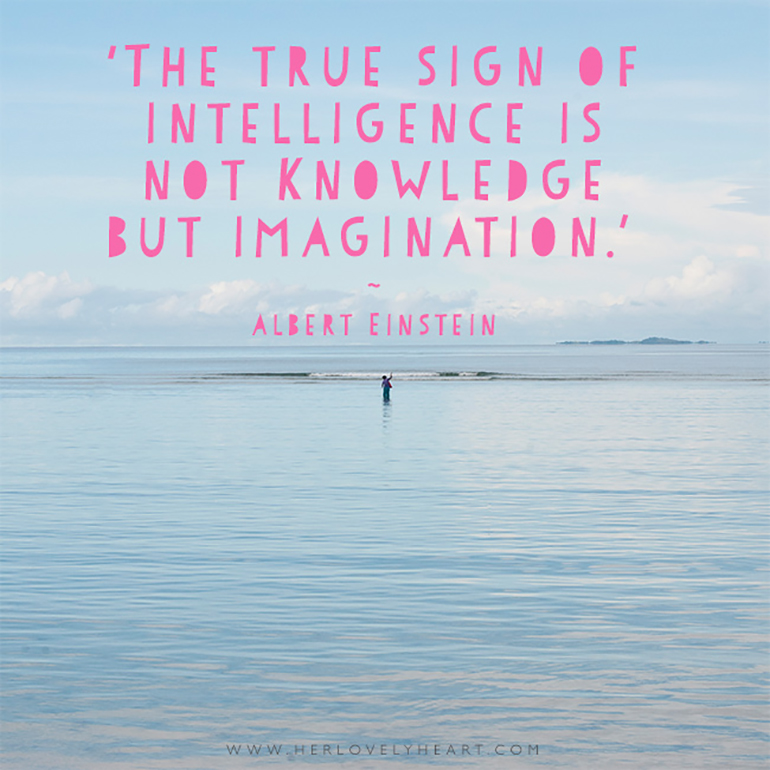 We all have the ability to learn and read and study. We can all increase our knowledge base. But the sign of real, undisputed intelligence, is imagination, and there’s not enough emphasis on learning to leverage it to its fullest potential.

Having the ability to creatively come up with answers and solutions, produce something out of thin air, or to conjure up a new idea that is original and exciting and smacks of newness, is not only incredibly alluring, but it also shows a great mind at work…

In my opinion there is too much emphasis on credentials, academic achievements and material status, and not enough on thinking outside the box, because we still haven’t fully opened our minds to understanding what creativity truly is and all it can manifest.

I believe it’s no coincidence successful people dream big, they imagine what they want to be, do and have in the future and then pursue that vision, as if it already exists. Imagination is everything in business.

One of the most successful yet imaginative people to walk the face of this earth is Albert Einstein, who allegedly said “The true sign of intelligence is not knowledge but imagination.”

Einstein felt that imagination was more valuable than logic: logic could get you from A to B, but imagination could take you everywhere. He was an early believer in trying many new things and not fearing mistakes and felt that someone who never made a mistake never tried new things. His view was that any intelligent fool could make things bigger and more complex, but the genius and courage was in heading in the opposite direction.

Therefore, appreciate the right side of your brain for all it can do and help you create. And by create I don’t necessarily mean drawing, sculpting, painting, and sewing (but if you can or did, but haven’t done so for a long time – I encourage you to pick up where you left off). It could be something as non-messy as creating a Pinterest vision-board, starting a journal, or leaving a pen and pad next to your bed for all those late-night ‘aha’ moments. Anything to get those creative juices flowing.

Here are six ways you can encourage your intelligence to have more creative fun that will also benefit your business:

Cultivate an insatiable hunger to learn, to question and to search for better answers.

Use all your senses to appreciate richer details, align perspective and perception, and thereby understand your subject, client, audience better.

Appreciate both science and art, logic and imagination, light and dark, and by doing so you will be able to think more broadly.

Thrive on ambiguity and uncertainty, as well as mystery and depth.

Experiment and test, make ideas tangible, and do what nobody has done before. Be brave.

Constantly renew mental and physical activities. Explore different regions, cultures and languages in order to spark new ideas. Don’t be a slave to work, but live a full, fun-filled life.